So I got this C2000 LED Experimenter's Kit from my Texas Instruments representative.  I have it setup on one of the PCs running the color light demo.  Everyone feel free to mess with it, the documentation is in the box next to the PC.  The kit itself supplies a license for developing on the kit via the USB. The kit includes a Piccolo microcontroller which has dsp functionality.  This may be a useful platform for the sign contol, and they have reference circuits for powering the LEDs. 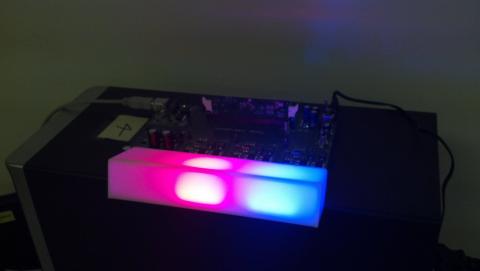 Here's the run down from their web site and links from the FAE:

The Multi-DC/DC Color LED Kit includes all of the hardware and software to start experimenting and developing a digitally controlled multi-DC/DC LED lighting system. This kit is based on the Piccolo microcontroller and the controlCARD development platform. One Piccolo MCU is able to directly control eight separate DC/DC power stages as well as up to eight LED strings of various LED types and string lengths. The development board takes 12-24V DC input and employs six Boost and two SEPIC DC/DC power stage topologies to drive LED strings. The six separate Boost stages drive two RGB LED strings, controlling the red, green, and blue color components of each RGB LED string. The two SEPIC stages drive two white LED strings. Alternatively, up to eight separate white LED strings could be driven via the eight separate power stages. An included graphical user interface allows users to quickly begin the evaluation process by providing simplified control to adjust power stage current levels for experimentation with brightness and color mixing. Furthermore, through controlSUITETM, the kit includes closed loop, open source software examples for the control of the DC/DC power stages and LED lighting stages. The kit hardware is also completely open source, with the gerbers, schematics, and BOMs all available for free. For more information, please see the quick start guide for the kit.

CCS Licensing Explained (there are many ways to use for free)

Control Suite – All of the C2000 projects, appnotes, documents, etc.