Not too long ago I ate at a small family run Italian restaurant in Dallas. Their claim to fame is handmade pasta and they have one of those $15K bronze die pasta extruders that leaves proper tooth on the surface of the pasta in order to better hold sauce. We tried many of their wares and the the standout dish was not an extruded noodle but a fresh egg noodle made for ravioli. The dish is called Pasta in Brodo (pasta in broth). More specifically it was a porchetta ravioli served in a chicken broth with a full sprig of rosemary dunked into the broth. I came home determined to reproduce this.

Chicken Feet and Necks (or you can buy broth if you...ahem...chicken out)

This is a thin pork loin rolled up with spices including salt, pepper and anise which give it a very aromatic flavor profile. Luckily, we have Ferraros meat market in New Haven where you can buy fine porchetta (like any dry rub, this preseasoning is best left on for a day or two to permeate the meat....getting this pre-made is a timesaver). You should start this first. A 3-4 pound porchetta should be roasted for about 45 minutes at  500F , then another 1.5-2hrs at 300F and then rested under foil for about 20-30 minutes.

While roasting the porchetta, you can make your broth, dough, and other ingredients.

Sure you can use storebought, but homemade broth can be sublime and this dish is really just about a few impeccably prepared ingredients. While at Ferraros, check out the chicken section where you can pick up chicken necks and feet very cheaply (vegan issues aside, nose to tail is a very responsible way to go for meat eaters). Bring them to boil in a huge pot of water and simmer for the entire time stirring occaisionally until you're ready to serve the dish. Most people cringe at the idea of using "parts" but chicken feet in particular contain lots of collagen and when it breaks down, produces a super silky broth thats unmatched by store bought.

Store bought bread crumbs are typically overseasoned and I reccomend making your own because its easy. Fresh or stale bread will suffice. I used a half loaf of Apicellas soft white Italian bread, cut into 1" cubes, spread onto a  cookie sheet, and toasted in the oven under the porchetta for 15 minutes. This will act as a binding agent in the porchetta mixture.

Bring a large pot of water to boil while you do this.

Make a flour volcano. This recipe starts with 3C four and 6 eggs (starting with  approx 2 eggs per cup of flour ...more eggs if dry, more flour if wet). 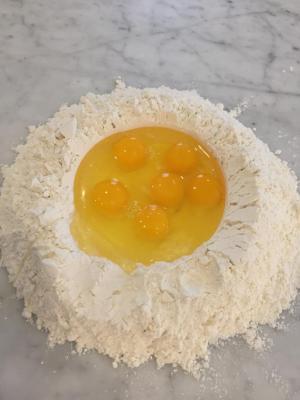 Mix the eggs with a fork and then slowly knock in flour in small amounts until the dough forms. 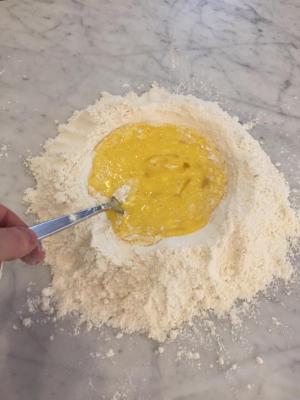 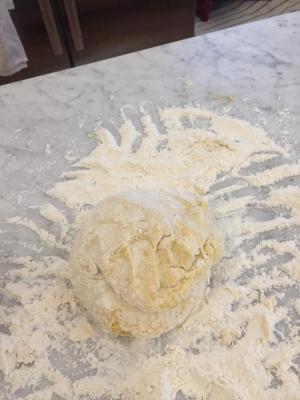 Wrap your dough in plastic and let rest in a cool place.

Using a dough scraper to clean off your counter, drop the extra flour into a sieve and throw away small chuncks of dough. You'll use the sifted flour later when rolling out the dough. 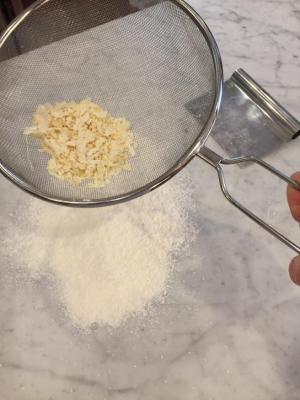 When porchetta comes out of the oven and is resting/cooling under foil, roll out your dough very thin.

The funny shaped rolling pin pictured is only used for making grid marks on the dough...if you have a ruler or just have a  good eye, you can mke the same marks with the back of a chef's knife.

When the porchetta has cooled a bit, dice about 2 lbs of it. Drizzle 1C water over bread crumbs in a  bowl, stirring it with your fingers to break up the bread a bit (be careful not to mush it into a paste.) Mix in the porchetta and in small batches in a  food processor, pulse 5-10 short bursts (be careful not to turn this into a spam like paste...its desireable to have small chunks of porchetta intact.)

Using a teaspoon and your fingers, dole out small lumps of the mixture into half of the dough grid. 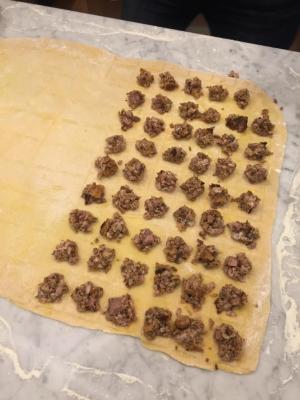 Then gently fold the other half of the dough over the pork and using a karate chop motion, gently seal between the lumps 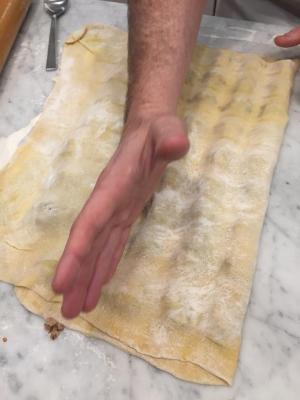 Then cut the individual ravioli with an (i don't know the name of it) wheely cutter. 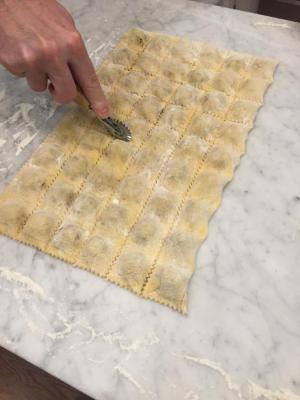 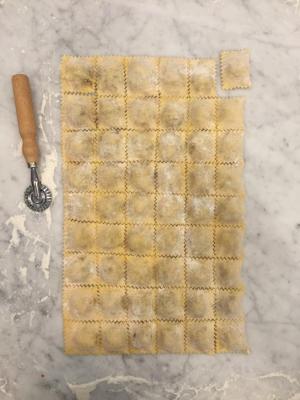 I did two of these with this recipe.

Strain the chicken broth and discard solids, leaving the cloudy broth at a low simmer.

When your large pot of water is at boil, salt generously and drop in the ravioli. Cook for 2-4 minutes and then strain...you just want to heat the ravioli...you don't want them to get mushy. (if you freeze some of these for later, I would probably boil them for 8-12 minutes.)

Put a sprig of rosemary in a bowl, add some ravioli and then top with generous ladles of broth. Serve with the remaining Italian bread.