Sous Vide is a cooking method with which you immerse vacuum sealed food in a hot water bath and cook it slow and low. The hot water bath is controlled by a water heater/recirculator with a very tight range of temperature control (to one degree F). Since proteins in particular are more temperature sensitive than time sensitive, sous vide allows one to cook and hold food for long periods of time without degradation or loss of moisture. These temperature ranges for various states of doneness are often from about 120F - 160F.

Although the term is French (it translates to "under vacuum") and the method has been widely attributed to two french chefs from the early 1970s, it was actually developed in 1968 by a retired American Army Col. Ambrose McGuckian. He was trying to improve hospital food in South Carolina.

I've been toying with Sous Vide for a couple of years now using a Joule device ($200, 1.5" dia x 10" tall, operated from a smartphone) and have had great success with proteins. Often I'll do a quick 30 second sear on cast iron either before or after (or both) and the results are remarkeable (juicy steaks and chicken with deep flavors imparted by included marinades and herbs). For a long time I forewent purchasing a vacuum sealer because you can use ziplock bags for short 2-6 hour cooks (removing air by dipping the slightly opened bag in water and then sealing...Archimedes principle). However, I just learned that ziplocks seams aren't durable enough for overnight cooks and  since I wanted to do one this weekend, I finally invested in a FoodSaver vacuum sealer. I looked at models ranging from $60-$180 and since the only burden of the $60 version was that I had to use scissors to trim my own bags, I chose that one.

This weekend I decided to try a 24 hour cook to prepare pork ribs. The long cook time is to break down the collagen in the ribs; something achieveable in a shorter 3-6 hour time on a hotter smoker/grill but which requires some skill and attention.  Since there is modest evaporation I needed a waterproof insulative pot lid and this is my simple hack.

I purchased a plastic cutting board  for $15 (the stiff but relatively soft kind that are made from polyethelene HDPE). I flipped my goto pot over onto the board, traced its outline with a sharpie, bandsawed it into a circle  and then band sanded the edges smooth. Then with a palm router on low speed, I cut a 3/8" rabbet around the entire perimeter (to prevent the lid from slipping off of my pot). Then I measured the amount that my Sous Vide device protrudes into the pot (my particular device actually clips onto the side of the pot) and then cut out a notch so the lid fits snugly around it. It took about 20 minutes. I was originally worried that the plastic might melt into my cutters but the HDPE cuts like butter.

All in all it went well. I'm at the moment half way through the cook and theres little water loss (I think the texture of the cutting board encourages condensation to quickly drip back into the pot much like the textured underside of a tagine lid). At the end of the cook I plan on doing a brief 10 minute grill for smoke flavor and to hopefully put a bark on the ribs. Bon Appetit! 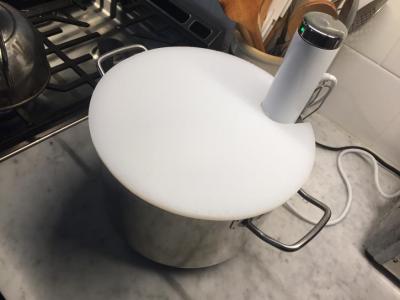 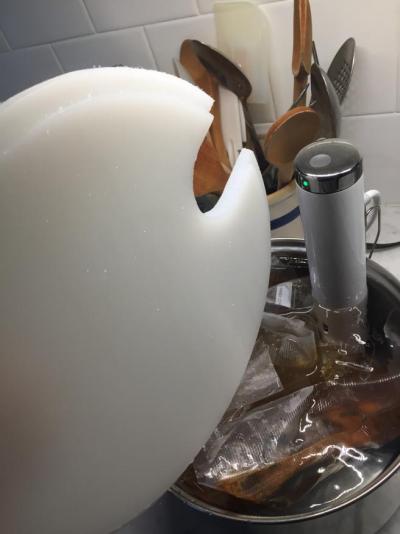