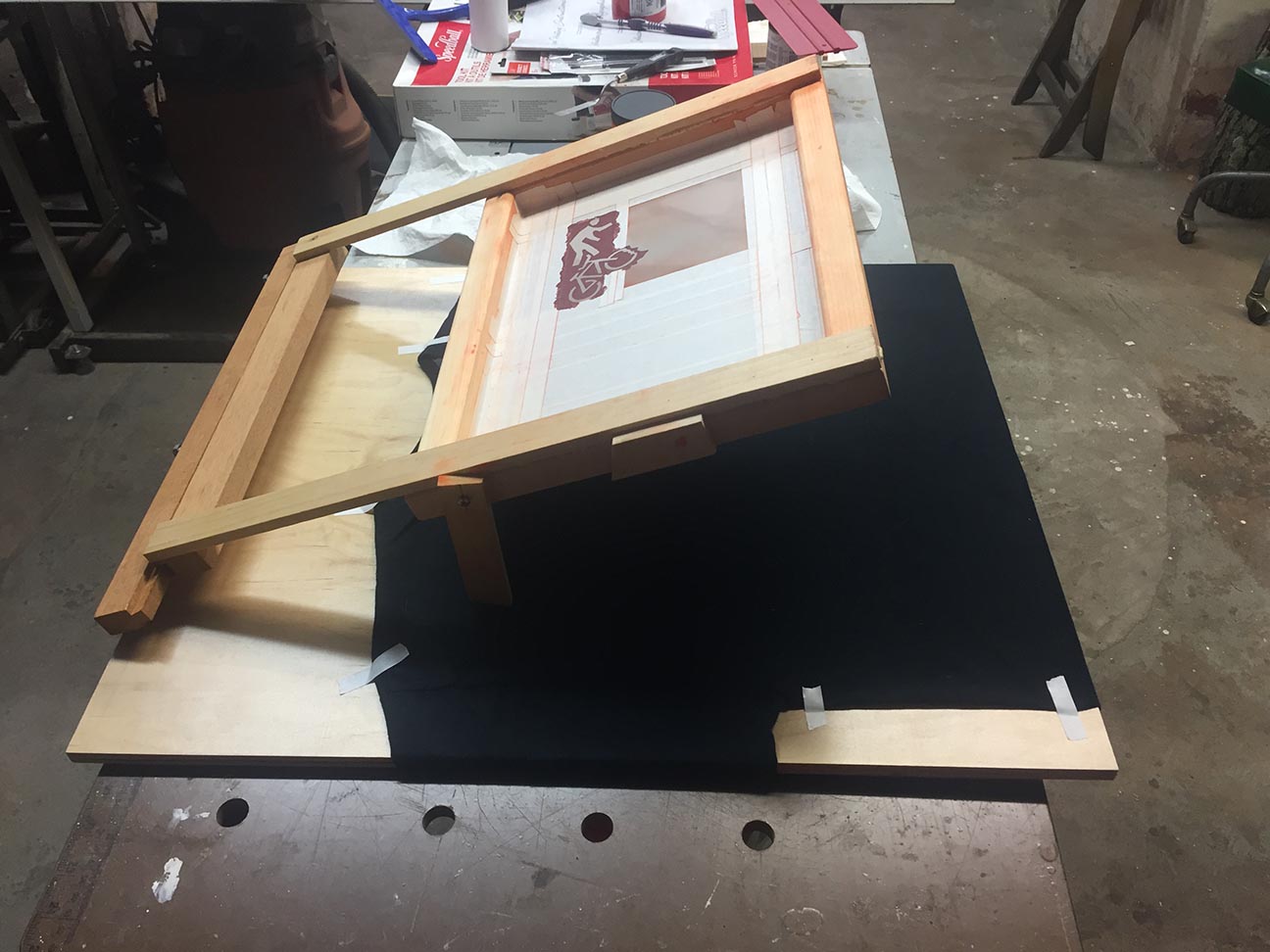 A long time ago I saw a funny logo about bike riding in San Fran and, given the rustic state of our own city's road infrastructure, it inspired me to rework the logo for New Haven. I've always been fond of the New Haven Railroad logo designed by Herbert Matter and used that as the basis of the design. I then merged in a human figure ala Saul Bass (Hitchcock's "Vertigo" logo) and a touch of Milton Glasier's "I Love New York" logo. However, I knew nothing about silkscreening and had to teach myself (meaning heavy reliance upon the intertubes and sage screenprinting advice from awesome local artist Alexis Brown.)

I found the trickiest part of silkscreening to be registration...that is, getting a second or third pass of silkscreening to line up properly with the previous ones. Rather than purchase a $4000 mulitcolor silkscreening station I opted to design and build my own (zero dollars fit my budget perfectly). Its a pretty simple device that opens and closes like a book and the key functionality is that I can easily switch out screens for different patterns/colors and have them lock into exactly the same place. The work surface is flat piece of finished veneer plywood @24"x34" (t-shirt size). I then took some cutoff 1x2 wood and routered matching male/female dovetails. I oversized the female dovetail very slightly so that the dovetails slide easily. I glued a stop onto one end of the male dovetail and then attached it to the top of the work surface with hinges. Then I ground a blunt end onto a couple of lag screws and drilled a slightly undersized hole in the male dovetail, inserting the lag screws loosely enough so that I can finger tighted them. These serve as a lock for the female dovetail when its put on the male dovetail. Then I permanently attached the female dovetail to the silkscreen frame with two pieces of scrap wood and some glue (you'll need multiple female dovetails for multiple screens so make a bunch). Each screen also has a pivoting leg that I can deploy to keep it up in the air above the T-shirt when I'm priming the screen with ink. By the way, when I began using it, I taped my artwork to the worksurface and then locked each screen into place to trace the artwork onto the screen thus guaranteeing registration. I use the term guarantee loosley becuase unfortunately, my hinges are very slightly wiggly and I sometimes get slightly off registration...next time I'll call NASA for the hinges.

Results...fair to middling. I have a greater respect now for artists that work with wet media. I was pretty psyched one recent day when I was out shopping and happened to be wearing the shirt ...an elderly couple approached and said to me, "hey have you ever heard of the New Haven Railroad?". The fellow worked there for many years. Many thanks to local graphic designer Angie Hurlbut, friends Ed Dionne and Molly Dotson for their patient critiques and to Caleb Nyhart for inky troubleshooting advice.